Taking my hobby to the next level (the beginning)

So what does "the next level" means? What can actually come above collecting and painting the most awesome Chaos Dwarfs ever made?? All the C16s, the D3s and the Marauder Miniatures MM90-line's? The miniatures that have kept me in the hobby all those years?


Yeah, right! If so, they do Ancient Battles. Recreating the second Punic War or some battle at Waterloo, they are. Perhaps you should try out some historical gaming, as you seems to have the age for them!


- NO! Fantasy is my genre, and will always be my genre.


So you'll use the next 40 years collect and paint old fantasy lead?


You want to sculpt your own fantasy miniatures - lol...?

- No, no already tried that and I'll admit that I will never be good at it. I am - of course - proud of my Four A Miniatures Dwarf Standard Bearer (Dronzak Bannerfist) - and also of those Grenadiers I did last year - but I'll leave it to the professionals - to the real miniature sculptors.


So you'll ask another guy to do the job for you, then?


Aly Morrison? The man that did so great 20 years ago?


- No, no he is still engaged with GW, so can't take on such a commission and he also work in a very different direction, now. Seems to have forgot all about that "old feel".


What about that other guy? The guy that did those "Twisted Tales" ones?


- Sjoerd Trouwee - lol - the guy that sculpt a miniature each two years? I'll then be 50, before I get anything. No, I'll probably need a guy with faster hands, I guess.


So why not try ask that sculptor you have been speaking so much of, lately. What was his name? Robert Redford?


Okay! Sorry! - John Pickford, then. You should ask him.


- Hmm! maybe that's not such a bad an idea. He is my all time favourite fantasy sculptor, you know - and have been doing some wonderful dwarf stuff for White Knight, so if something similar was done in a more vicious and sinister style ......! - and done by the very best .....! Guess, it would be a win-win situation.
But it will cost. It will cost an arm and a leg! And what will my wife say? - and what about John, will he even take on such a job ...?

Wife said .....: "Yes, why not let that be your 40th birthday present. I've been looking for something personal and unique, like the tattoo you gave me, when I turned 30th! But I couldn't find out what to give you. And every time I have asked, you always say "you got all the things you need" - but now it seems like there is actually something you need".

- and then John said: "Surely, Evil dwarfs have been one of my favourite fantasy subjects, but have never had the time to actually work on them, so this is the perfect chance! - but you'll have to wait till I have time for them".


And so I waited, and waited, and waited .... but in January I started seeing conceptual pieces and after a few weeks we came to an agreement regarding concept, components and style. And after that, I literally got "spammed" with WIPs. Lots of them, and gave me a lot of components, more than I originally had asked for.

And before I knew of it I was suddenly looking at these .... my (dare I say) first set of unique multi parted Ewal Dvergar 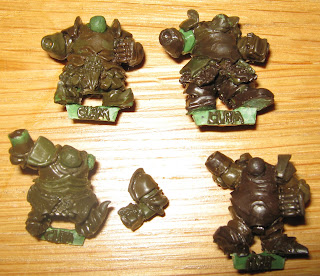 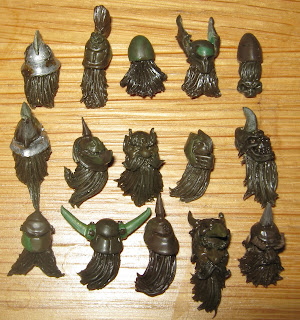 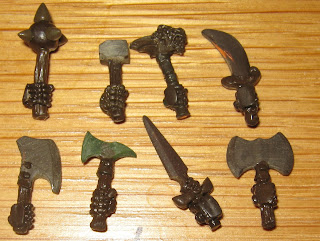