Have already shared Mikkel Nyboe's Johann pictures with you all, but now that I had the camera out, I made these here. So here is an almost 360 degree tour around Johann, by Mikkel Nyboe: 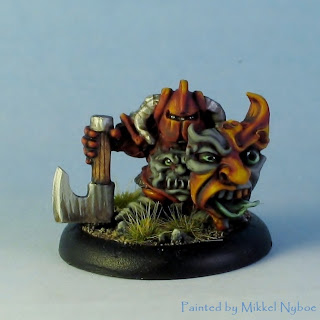 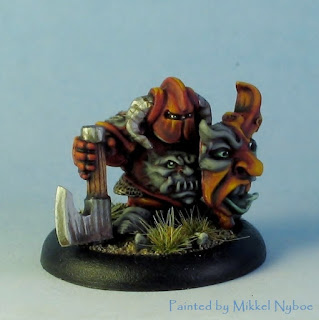 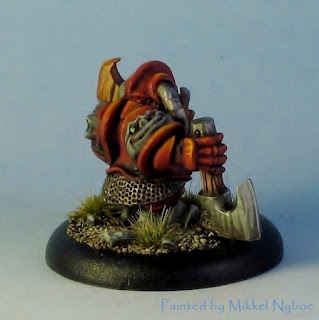 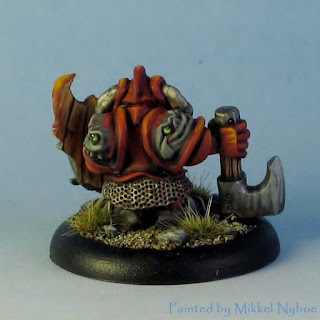 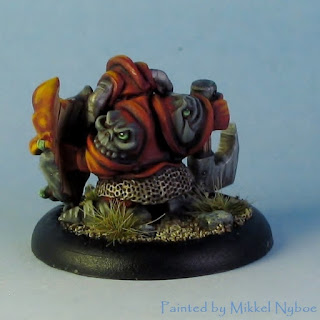 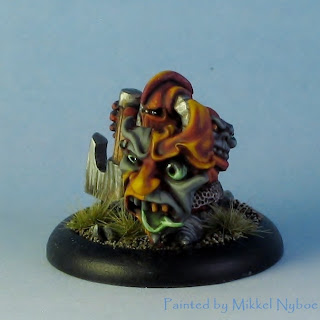 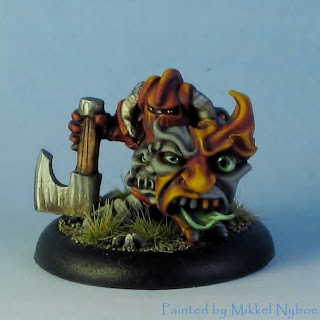 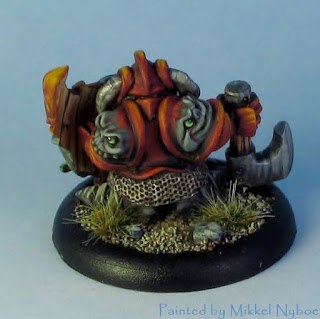 After a long wait I finally got something to show. I'm still waiting for John to find time doing next batch, but hopefully he will find time in a not so distant future :)

But while waiting I want to share Blue in VT's fantastic job on Johann, Ewal Dvergr Champion.

Blue painted Johann as part of his finally submission for the Brush Slave League @chaos-dwarfs.com. Blue have shared lots of his thought and decisions on his own blog: Blue's Maraudering Miniatures - so when you've finished drooling over these beautiful pictures you should go and have a look - quite a good (an fun) read.

Beautiful, beautiful paintings (as always) by Mr. Blue in VT. He did a spectacular job on Johann.

And some might call this bad timing as I running out of Johann's - as I've just sold the last one I had up for sale for sale.

Johann hasn't been production moulded, as I'll not do an entire mould with just him alone, but plan throwing in a few more character-type miniatures with him. But as I haven't come around to do that yet (as the other character types hasn't been sculpted yet) I'm afraid it will be some time before he'll be back. But he will get back, trust me :)
Posted by CLAM at 05:58 No comments:

Tried painting a few myself.

Have been taken a bit longer than planned, but better late than never :) 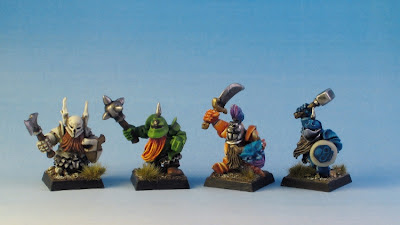 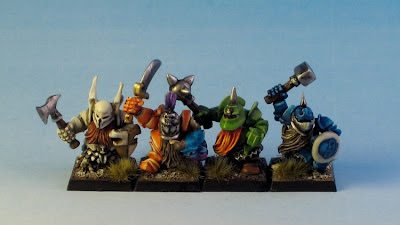 - and finally, the complete Ewal Dvergar warriors with hand weapons and shield (set #1) has just arrived. 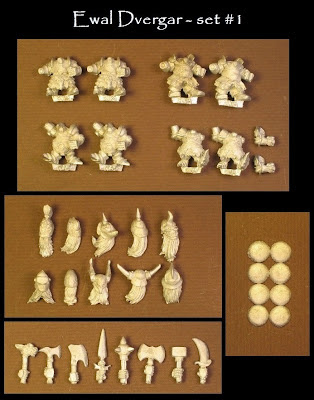 The set consists of:


Got a few more sets than I'll be needing myself, so have now added a "How to get some" - page. You'll find a link to that page on the right hand side of this blog. In here, you'll find all the details you'll be needing, I'm sure.
Posted by CLAM at 07:51 1 comment:

Okay, when I can't man up to paint my miniature myself - I'll better let someone else do the hard work.

I have been following Mikkel Nyboe's blog/site for years and am a great fan of his work and totally love his style of painting. A style that fit most fantasy ranges so very well.

Mikkel have been around the painting scene for years and have painted lots of stunning and wonderful miniatures, so I found it pretty obvious to try and convince him to do the Johann miniature for me. And it wasn't really that hard, cause - like myself - Mikkel has a great passion for "old school" fantasy so my line of miniatures must have seemed tasty enough to convince him. And while I've be enjoying my holiday in Portugal - Mikkel have been working hard, very hard.

So, here here his is - in all his glory: 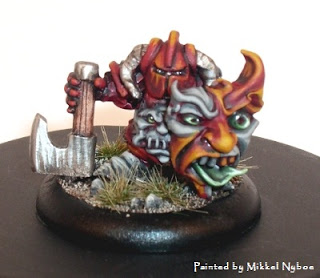 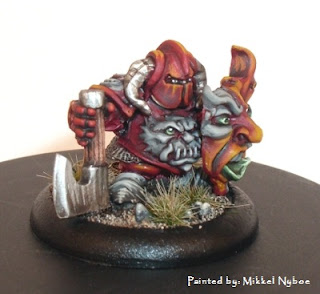 - and now some painted ones (by Blue in VT)

Miniatures are all painted by Blue in VT. He did one hell of a job painting these - and really did the fantastic sculpts justice.

Thanks Blue, thanks for all your help and support.

- and then some assembled ones

And then its time to share some assembled versions.

Need to save most of the masters for coming production moulds, but there should be enough for allowing  some piece of fun: 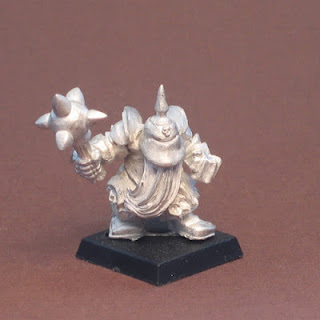 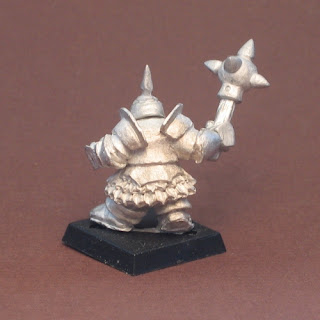 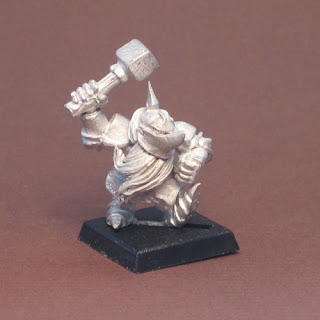 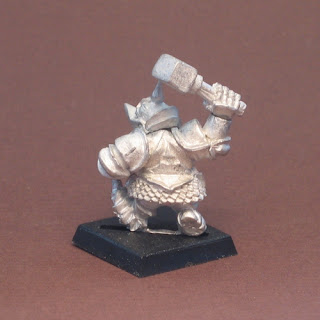 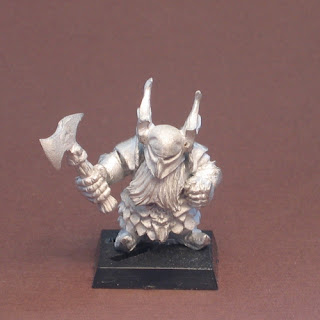 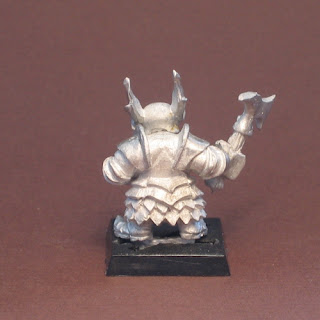 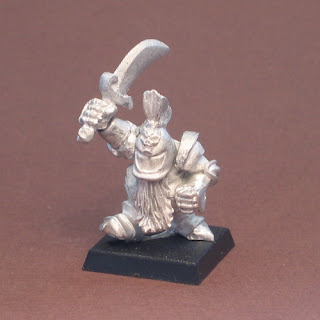 And here to show that they actually are rankable, but like most other 20mm based miniatures it will be a bit tricky - luckily most of the shields are rather small-ish. 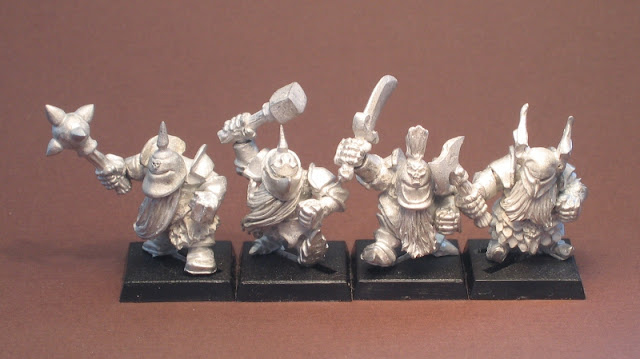 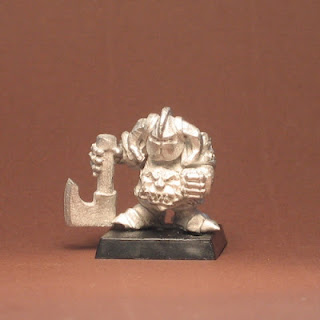 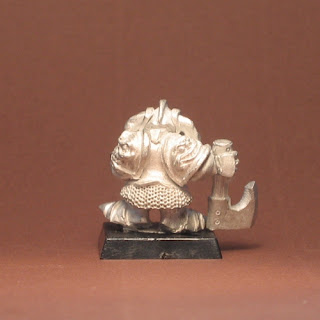 Okay, so lets get on with it, and let me show you what this is really about :)

Early May all greens (including my own humble tries at sculpting) went off for mastering in the UK. And after about 4 weeks these two bags was delivered at my address, here in Denmark.

But, I guess you are more interested seeing what's actually inside those two bags, right?